Interview in The Independent! 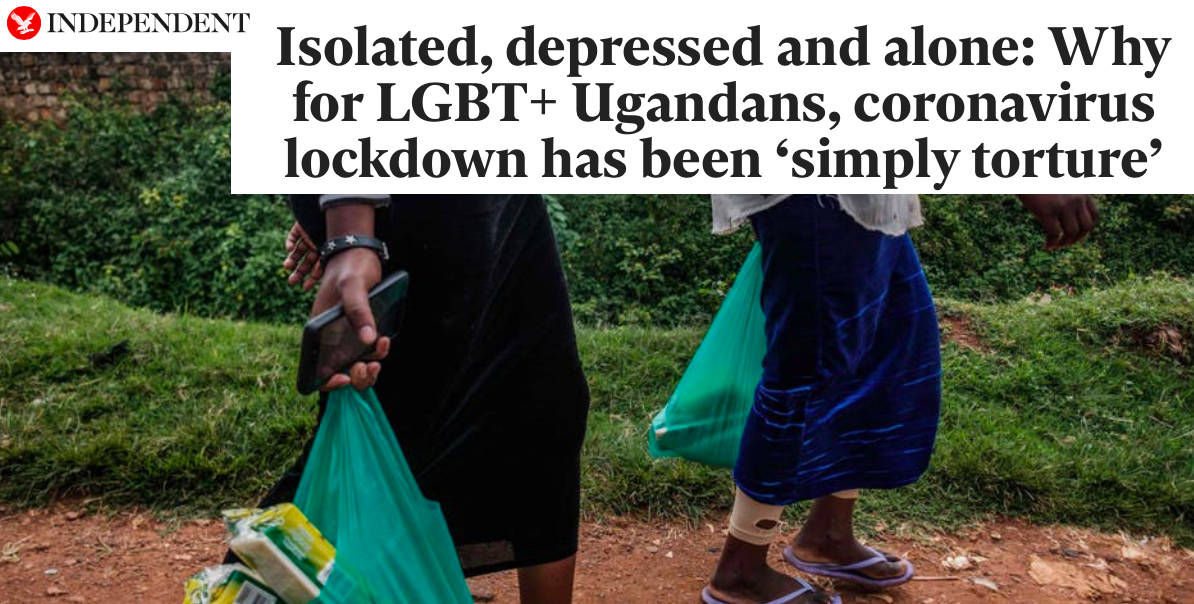 08 Jun Interview in The Independent!

Posted at 11:58h in News by Rainbow Riots
Share

“Isolated, depressed and alone: Why for LGBT+ Ugandans, coronavirus lockdown has been ‘simply torture’”

“Keem Love Black has spent more than two months indoors in her home in a suburb of Kampala, Uganda’s capital. But while the coronavirus lockdown has been tough for everyone, few have been left more vulnerable and afraid than trans women like her, living with HIV.

Black is terrified of being outed as trans if she has to spend too long in close proximity with her neighbours, or as HIV positive if she receives testing for Covid-19. As a commercial sex worker, either outcome could threaten her safety in the conservative East African country where the lockdown has heightened existing stigma, discrimination and violence towards LGBT+ people.

“Being home the whole day, every day is torture,” Black tells The Independent. “I have been exposed to my neighbours. People used to see me on social media but since the lockdown everyone is home.

“I am afraid because they [have] started noticing me,” she adds. “I haven’t been harmed but am thinking of relocating after the lockdown.”

On 29 March, police raised an LGBT+ shelter for children on the outskirts of Kampala and arrested 23 gay and bisexual men and trans women, accusing them of disobeying rules on physical distancing. Most were held for 49 days before prosecutors finally dropped all charges.

Sexual Minorities Uganda (SMUG) said in a statement that the raids were “unnecessary” and motivated by homophobia. “This tormenting of the LGBT+ community has to end,” said Frank Mugisha, the NGO’s executive director. “I appeal to law enforcement officers to refrain from using their powers to harass and target LGBT+ people.”

Black says that as well as the unlawful arrests, LGBT+ people are being disproportionately targeted with orders to get tested for coronavirus, in part because of higher rates of HIV among the community. “They are afraid that people like us, with such a disease, are more likely to get Covid-19. It’s psychological torture.”

“We are already discriminated [against],” says Elvis Ayesiga, a programme director at the NGO Icebreakers Uganda. “Then if we are tested positive for Covid-19 it will be another problem for us.”

LGBT+ people in Uganda are only able to express themselves freely within the community, he explains. “The lockdown means community members have to go back to living with their homophobic families and friends. It means we have to be careful in whatever we do, day and night.”

Kowa Kay, an HIV campaigner with the NGO Rainbow Riots, says the lockdown is taking its toll on both the mental and physical health of LGBT+ people with HIV. “For the average LGBT+ Ugandan youth, [the lockdown] is simply torture,” she says. “[We are seeing] isolation, loneliness and depression.”

Kay, whose job involves helping HIV positive people access vital health services, says she has been walking long distances each day to collect and deliver antiretroviral therapy (ART) medicine to clients, but she cannot reach everyone. She fears a spike in HIV-related deaths as a result of the lockdown.

“Many members still remain stranded, and for those who were caught away from homes and medical [records], the situation must be alarming.”
Black says she and other HIV positive people she knows have missed appointments to receive ART. “Access to health services now is very hard. There is no public transport, and I can’t walk a long distance to the health centre. It’s a very big challenge.”

According to government statistics, HIV prevalence among gay men in Uganda is 13 per cent, and 37 per cent among sex workers. There are pockets of high prevalence in other sectors as well, including among men in uniformed services (18.2 per cent) and among fishing communities (as high as 40 per cent).

Emmanuel Ainebyona, a spokesperson for the health ministry, said all at-risk groups still had access to ART services and refills through accredited health facilities.
“We use SMS [text messages] to remind them, dropping drugs through the people they trust and village health teams,” Ainebyona told The Independent.

But Kay says the problem is not lack of services, but the means to reach them during lockdown. “The inability to move, the joblessness and basically zero support from government has left many without any basic needs,” she says.

Activists have also criticised the office of the prime minister for failing to consider LGBT+ people as a vulnerable group for the food relief distribution programmes in Kampala, Wakiso and Mukono cities.

“It’s difficult to get food nowadays,” says Black. “We eat once a day. My immune system is now low. It’s easy for me to acquire other diseases.”

Homosexuality is still illegal in most countries on the African continent. Under British colonial-era laws, gay sex in Uganda is punishable with life imprisonment.
Things don’t appear to be getting any better, either. In recent years legislators pushed for a new Anti-Homosexuality Act – dubbed by some the “Kill the Gays” bill because it included the death penalty – which was only overturned by the constitutional court on a technicality in 2014.

“The Ugandan government needs to recognise that love is not a crime,” says Petter Wallenberg, founding director of Rainbow Riots. “They need to decriminalise homosexuality and recognise human rights for all people.”