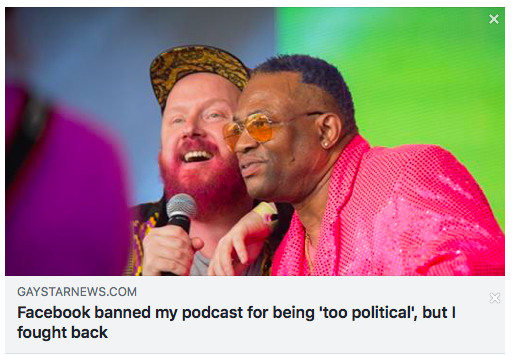 Posted at 15:53h in News by Rainbow Riots
Share

Our founder Petter Wallenberg has written a piece for British news site Gay Star News which is out now:

“I’ve spent the last two years creating a new podcast called Rainbow Riots Radio, featuring queer stories from around the world. It’s both a web radio series and a musical collaboration I have made with some of the people I have met during my travels to fight for LGBTQ from Uganda to India, Australia, Jamaica and Nigeria.
I wanted to give voice to my queer brothers and sisters who are often silenced. Little did I know, that I would barely unveil the podcast before it nearly got silenced.
The first episode came out two weeks ago and features an intimate interview with 73-year old gay historian and author Lars Fimmerstad, who has lived through modern gay liberation and lost the love of his life during the Aids crisis in my native Sweden.
In this episode we touch upon how gay people were vilified and silenced in mainstream media and society, not that long ago.
It’s not an unfamiliar story, yet I had to fight to get it heard, as when I tried to run an ad for it on Facebook, they banned it, deeming the content too ‘political’.
I was surprised. As queer people, we didn’t choose to be political. We just want to live our lives like everybody else. When two straight people hold hands in the street it’s viewed as personal – when queer people do it, it’s viewed as political.
That a big American corporation censured our queer stories, was a dejavu moment to me.
I remember when I was fifteen, and another big American corporation, The Disney Company, stopped the British pop group Erasure from performing on Swedish TV because front singer Andy Bell is openly gay, which went against the brand’s ‘family values’. This was in 1992. It’s really not that long ago.

But people forget. Queer people forget. We are so eager to be accepted, that we happily bury the past and move on. But it’s important to remember our history, or it can easily repeat itself.
So I protested and I went to the media. Last week the Facebook ban of Rainbow Riots Radio was all over the Swedish news.
I think this helped my case, because after I demanded that they prepare a statement to the media, they finally budged and lifted the ban. ‘We have decided that the content is not political’ was Facebook’s somewhat puzzling explanation.
It just shows that it’s worth fighting your corner. But the battle is not over.
This is a conversation much larger than just content on Facebook. Many of the people who I have interviewed for Rainbow Riots Radio live in countries where it’s illegal and dangerous to be queer. In more than 70 countries around the world we as LGBTQ people risk being arrested for simply being ourselves. In regimes where we have no human rights – social media is often the the only voice we have. To take that away is to silence all of us.

If we get complacent, we risk losing our rights. Not just us queer people, but everybody. Before we know it, freedom of speech can be taken away. That’s why it’s important that we keep getting our voices heard.
Today we release the second episode of Rainbow Riots Radio, which is about Jamaica, a country so homophobic queer kids live in the sewers, fearing for their lives.
The guest this time is my friend and collaborator Mista Majah P, a Jamaican rapper who is one of the few taking a stand against homophobia. This can be a dangerous thing to do. During our talk, things got deadly serious, as he suddenly received a death threat.

No matter how far we have come, violent homophobia is still alive and kicking in 2018. This is what makes all queer lives political, regardless of whether we ourselves choose to be political or not.”